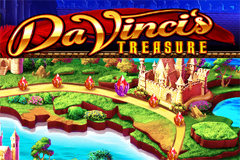 Da Vinci’s Treasure is an UK slots games that was produced by Malta-based games developer Pragmatic Play. It is one of many games that seem to have adopted the work of the Renaissance artist Leonardo Da Vinci as its theme. This game is a little different to some of the other online slots that have Da Vinci in their title, though. In this game, the main character is an Indiana Jones-type treasure hunter called John Hunter. His job seems to find Da Vinci’s lost artworks, and the action of the game is based on this premise.

In this review, we will take a closer look at this on line slot and aspects like its bonus features in detail. You can also find out a little bit more about the developer and the other games in their range of titles. Read on to discover all you need to know about Da Vinci’s Treasure!

This game offers five reels, three rows an 25 pay lines of action. The reels are set in a wooden frame with a treasure map in the background. Letters and numbers function as the game’s lower value symbols. The higher value symbols are all objects associated with John Hunter, such as his crossbow, a knapsack and a mystery book.

The highest value symbol in the game is the character of John Hunter himself. He is easy to spot as he is the bearded, rugged-looking character wearing a raffish hat. Clearly fancying himself as something of an Indiana Jones, Hunter can pay up to 32 times your stake per pay line. However, this is only if sufficient numbers of his symbol spin in on the right place on the reels.

The game’s wild symbol is a framed portrait of Leonardo Da Vinci himself. He will appear only on the second, third and fourth reels. He can substitute for all other symbols to create winning combinations for you, apart from the scatter symbol. The scatter symbol is the code wheel, and this can only appear on the middle three reels, like the wild.

If three scatter symbols land on a pay line in the same spin then one of the game’s three bonus features will be triggered at random. One of these bonus features is the MapQuest feature. In this game, you are shown a treasure map that is made up of 23 squares. As you spin the wheel you will move across this map, with the further you go making the potential rewards bigger. You can win a prize worth up to 100 times your stake in this feature.

There is also the Progressive Multiplier Free Spins feature, which offers you 12 free spins. The stake multiplier will increase by a factor of one on each of these spins. The feature can be re-triggered too, meaning that your potential rewards could be 60 free spins, with a 60x stake multiplier attached. In the Prize Picker features, you have to choose from three possibilities to win a prize.

The graphics and sound in the game are solid without being spectacular. If you enjoy playing fruit machines in an online casino you should find plenty to enjoy in Da Vinci’s Treasure. 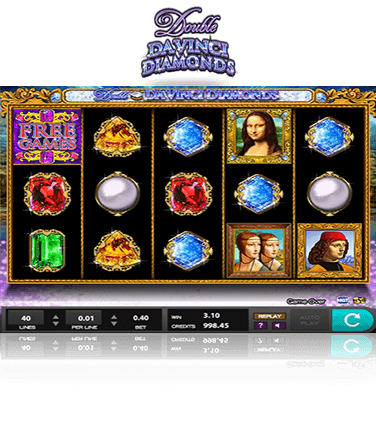 Pragmatic Play is a relatively new company, having been founded in 2015. Despite having been around for only four years or so, they have managed to establish a reputation for the high quality of their online slots. And, if you enjoy playing fruit machines in an online casino then the chances are pretty high that you will have played at least one of their games.

Like many other companies who work in the online slots industry, Pragmatic is based on the Mediterranean island of Malta. Their main offices are located in the Maltese coastal town of Sliema. They have offices all over the world. As well as in Malta, you can find Pragmatic premises in Great Britain and Gibraltar, as well as in Ukraine, India and Romania.

The company may only have been around for just under four years, but the quality of their output has seen them pick up many awards. In 2017, Pragmatic won the top prize in the Software Rising Star category at the EGR B2B Awards. In the same year, they also received three prestigious awards at the Malta iGaming Awards. They took top prize for Best Digital Company of the Year, Best Gamified Experience Company and Best HR Director of the Year.

A measure of the expertise and ethics that the company deploys in its business practices can be discerned from the fact that they hold licenses. These are gambling licenses from two of the world’s most stringent gambling regulatory bodies. These two bodies are the Malta Gaming Authority and the UK Gambling Commission. Holding licences from these two bodies is like a certificate of excellence when it comes to fairness and quality in the gaming industry.

If you want to play more than one game, then join Star Slots and spin the Mega Reel for the chance to win up to 500 Free Starburst Spins or for other popular casino games.

Other games from Pragmatic that you might find in an online casino include:

Da Vinci’s Treasure is an online slots game that offers great entertainment. It's a game for people who enjoy playing fruit machines in an online casino. While not the most innovative or visually stunning game out there, it has three good bonus features. These features are all fun to play and offer you the chance to pick up some decent prizes too. This is not a game that will disappoint you on any level, even though it does not qualify as a true all-time great of the online slots genre.

There is still plenty of fun to be had with this game. This slot game is a typical example of the all-around solid quality that can be found in Pragmatic Play’s range of online slots titles. Make sure you look out for Da Vinci’s Treasure in your favourite online UK casino, you will not regret spending some time spinning the reels in this game. If you are more of a fan of the sequels, then check out Double Da Vinci Diamonds Slot.