Jackpot Quest is an online slots game from the stable of well-known developer Red Tiger Gaming. The game has the 1930s, Boys Own Adventure type theme which centres on the hunt for treasure.

The game’s graphics evoke this theme perfectly, and there are some nice bonus features too. Read on to discover more about Jackpot Quest! You can also find out more about Red Tiger and the other online slots games that they have produced.

Jackpot Quest is one of the top games on Starslots; make sure you don’t miss the opportunity to spin the Mega Reel for the chance to win Starburst Free Spins.

About the Bonus Features of Jackpot Quest Slot

Jackpot Quest has six reels, six rows and 20 fixed paylines, with the reels set in front of a dramatic jungle backdrop. Also on the backdrop are some black and white snapshots of the heroic adventurer.

Who is the game’s main character. He is depicted doing various heroic things. Like climbing up cliff faces and peering into dark tombs with a fiery torch.

Items associated with this adventurer are the game’s higher value symbols. So, you can find a satchel, a whip and a map on the reels, as well as a golden slot machine, for some reason.

The lower value symbols are, typically for online fruit machines, the letters J, Q, K and A, and the number 10. There are no wild symbols or bonus symbols to look out for, but the Ruby Talisman does play an important part.

One of the game’s bonuses features is the Win Respin. Which is triggered whenever a high-value win spins in on the reels. All winning symbols will lock in place during this feature to help form more winning combinations. Several features are triggered by the Ruby Talisman symbol.

If Talisman land anywhere in view at the same time. As 2x2 square of higher value symbols appears on the reels. You can benefit from one of three different features. These vary according to the high-value symbol on the reels. 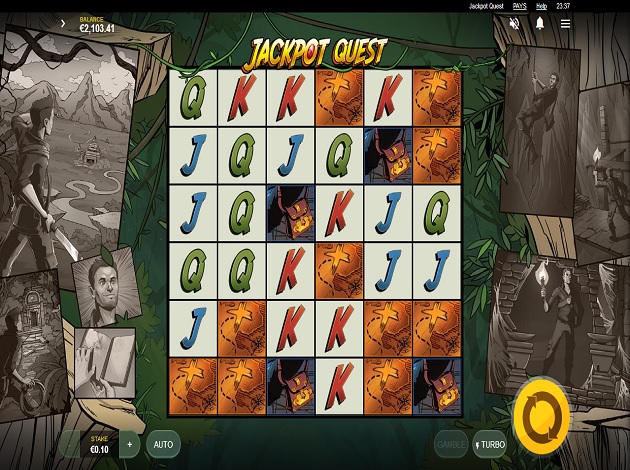 About Red Tiger and Their Other Games

Red Tiger is a relatively new developer, as it was only founded in 2014 – but they have produced some of the best slot games. A group of gaming experts, maths wizards and entrepreneurs across Asia and Europe.

Have decided to pool their knowledge and found a new, innovative gaming company. Based on the Isle of Man. They have produced a varied range of titles. If you enjoy playing slots online you are almost certain to have had a spin on one of them.

Red Tiger games make full use of the HTML5 platform. Which means that they can be played on a wide range of devices of different sizes.

Their games are also known for deploying innovative features. Such as progressive jackpots and ceiling jackpots. The company is based in the United Kingdom, with its headquarters located on the Isle of Man.

Other Red Tiger games that can be played in an online casino include:

Jackpot Quest is an entertaining uk online slots. Which has some great comic strip style retro graphics for you to enjoy? Despite there being no wild or bonus symbols.

There are still a couple of great bonus feature games for you to enjoy. You will find yourself being drawn back to this game time after time once you have had your first spin.

Make sure you look out for Jackpot Quest in your favourite online UK casino! If this game is not your cup of tea, make sure that you check out Jackpot Raiders Slot.