Leap into action with this Irish inspired slots game with leprechauns all over the screen.

There are all sorts of lucky Irish symbols hiding within this Rainbow Riches Megaways such as the rainbow, pot of gold and the golden horseshoe, but which will be the luckiest symbol for you during your playtime here at Star Slots, a prime location for Starburst free spins!

Still in its first year of release, Rainbow Riches Megaways has been an instant success with gamers for many different reasons but mainly due to its cascading reels feature and the number of paylines that are open to wins in this slots game.

With so many free spins up for grabs, there are plenty of ways in which you can spin the reels without having to spend a single penny too which is obviously a great incentive to play.

Barcrest have done well with this addition to the Rainbow Riches line up and this has been made clear with this variation of slot winning the Top 5 in the Slot Rank Chart position less than one month after its release.

About Barcrest and Their Other Games

Established in 1968, Barcrest have over 50 years of games development experience and this is clearly evident in the way that they produce their games.

Having begun life as a machines developer, they quickly saw a pattern developing where the majority of business was transferring to the online market and they quickly made the plunge into the world of online slots games.Now, they continue to stay one step ahead at all times to ensure that they deliver the best for their players every single time.

This has lead them to be one of the largest, most popular and most successful games developers around, supplying many online casinos and land-based casinos with their games in the past 50 years. They are known worldwide and have won too many awards to mention.

With headquarters in London and regional offices in Manchester, this UK games development company may have been bought out multiple times along the way by larger companies, but its original values have always remained the same, keeping the players at the heart of everything they do. 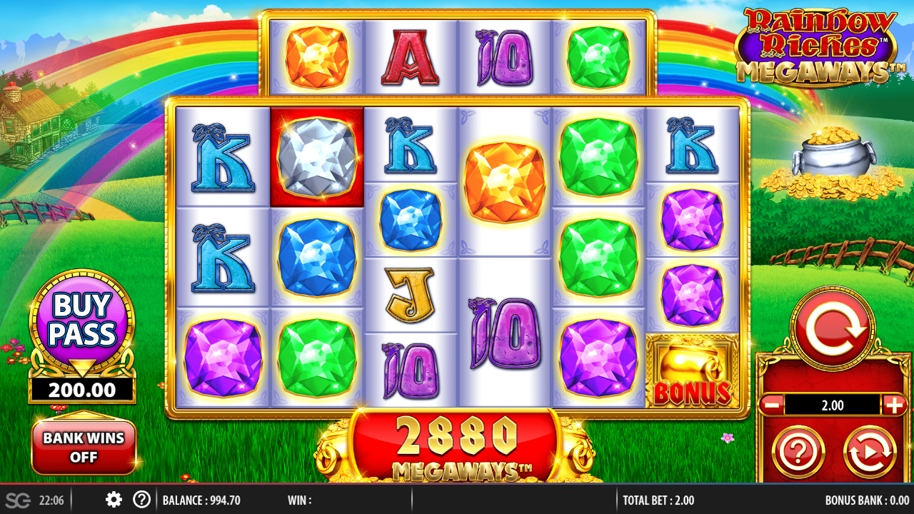 Rainbow Riches Megaways new slots online was released by Barcrest in July of 2019 and in August 2019 it won the Top 5 Slot Rank Award, soon followed by the Top 10 Golden Badge, which is a great indication of just how good this slots game is.

This is a mid to high variance slots game with an RTP of 95.9% so the stakes are pretty high but the rewards, when they appear, are high too.

The maximum jackpot available in this game is £10,000 which you are able to win by placing bets from as little as 20p up to a maximum of £20 per spin of the reel. This is a 6 reel slots game with 117,649 paylines in play and you are able to play this slots game on any device for your ease and convenience, day or night.

The main symbols in this slots game for you to look out for are not as exciting to look at as the Irish themed symbols but they offer a bigger financial reward.

The gemstones are where the larger cash prizes are hiding, with the clear gem giving you an impressive 50 times your initial wager if you are able to align six of them at the same time.

You should also lookout for the orange, purple, green and blue gems as these can increase your winnings from anywhere between 7.5 and 1.75 times your initial wager.

Every time you align a sequence on this slots game and win, you will see the cascading reels come in to play and this will increase your winning potential.

Another exciting feature of this slots game is the Super Gem Bonus Feature and this is triggered when a Super Gem lands on the top horizontal reel in any position.

This will then transform every gem on your reel at the time of the Super Gem dropping and your winnings will be calculated from that moment. This can lead to significant winnings without you even realising.

To trigger yourself some free spins you need to align a minimum of four pot of gold symbols and if you can keep landing an extra pot of gold, you can increase your free spins by five at a time.

The maximum number of free spins you can gain here is 22, but keep your eyes peeled on the top horizontal line as the extra free spins feature may drop and you can win yourself between one and three free spins without doing anything at all.

During your free spins feature, the cascading reels feature is also in play giving you a x1 multiplier for every win which can continue to increase without any limit.

If you are feeling a little impatient and have a bit of extra credit, you can even buy yourself some free spins at the cost of 100 times your stake.

If you haven’t seen a win for a while, this could be well worth the cost and could break your losing streak! 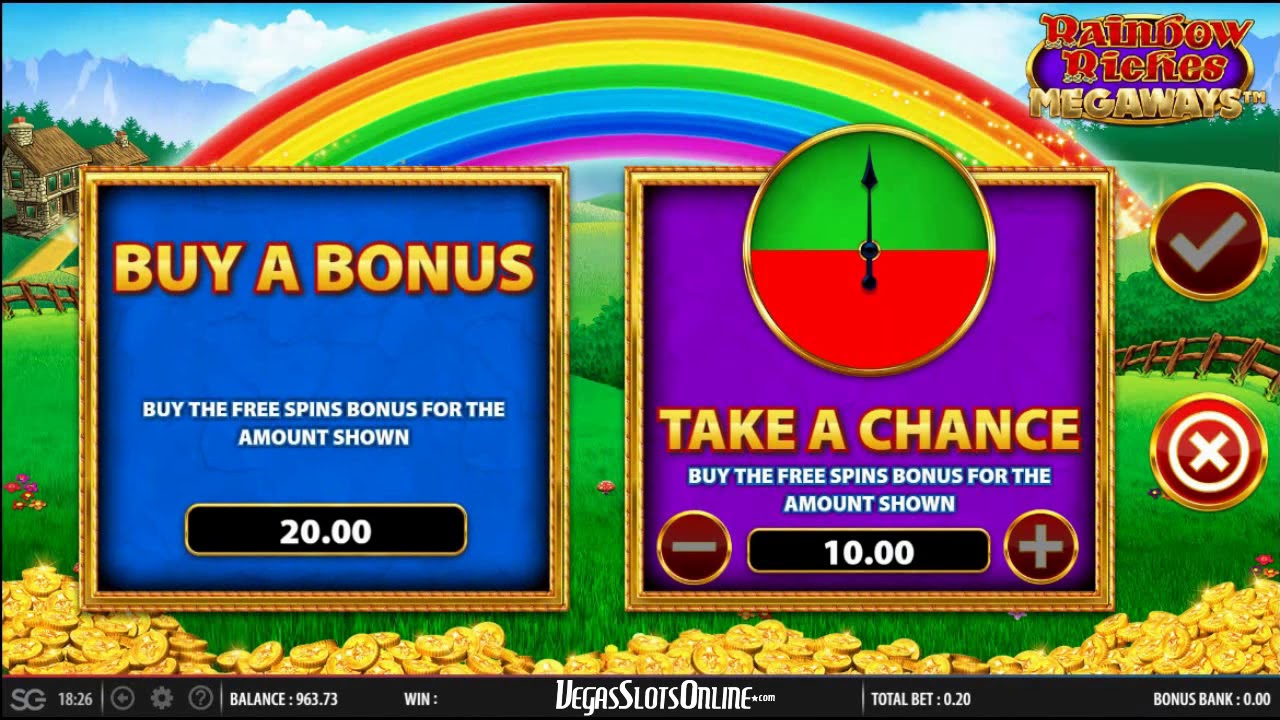 We love the game of Rainbow Riches Megaways because there is so much to do in this game and so many ways in which you can win.

With free spins in abundance, multipliers with no limit and cascading reels, your wins are quite literally limitless.

With the ability to buy yourself free spins, you can also increase your own luck which is something very few slots games give you the ability to be able to do so it is a very clever feature used within this slots game.

Whether you fancy the luck of the Irish, some adorable pixies like those found in the Pixie Wings slot, or are attracted to playing this slots game because of the glittering gems, you are in for a real treat, as there is so much to keep your attention to this game even for long periods of time. Play Rainbow Riches & Rainbow Riches Pick n Mix too!