Following on from the success of Thunderstruck, Microgaming brings you Thunderstruck II, an even more tense and exciting version of the very popular Norse-themed slot. Again, you’ll be joined by Thor, the God of thunder who may strike at any time.

The design is a lot better with beautiful animations of Gods and Goddesses. The style is more 3D and fun making the game a lot more inviting. The mysterious audio adds to the Viking theme too.

Thunderstruck II is a Microgaming slot with 5 reels and 243 ways to win. This online slot has more features than the original including a Wildstorm feature that is randomly activated and can cause up to 5 reels to turn wild and a great hall of star spins feature that has 4 free spins games. The top prize on offer is a great 12, 150x your stake.

As one of the world’s first true slot games online casinos, you can count on Microgaming for an entertaining and unique gaming experience.

They have a wide range of casino products from land-based to casino, bingo, slots, live dealer, sportsbook and poker so there really is something for everyone.

As they have been around since 1994, they have, of course, won many awards for their fantastic slots and casino games over the years.

Microgaming has a unique collection of over 200 slot games. They range from 3-reel slots to progressive jackpots, multiline slots, Viking-themed slots, and more.

If you want to see more of what Microgaming has to offer then be sure to check out these titles next:

Thunderstruck II is a 5 reel and 243 ways to win slot powered by Microgaming. It is the sequel to the ever-popular Thunderstruck which has a Norse Mythology theme.

Thunderstruck II is based on Thor, the God of thunder and he is here to strike the reels into winning combinations. In fact, you can win up to 12, 500x your bet in this slot.

The design of Thunderstruck II is a lot better compared to the first one. On the frosty blue reels, you’ll see playing card suits A, K, Q, J, 10 and 9 carefully carved from rock, a large hammer, Thor, a Goddess wearing a golden helmet, a magical kingdom, a grand ship, and various other Gods.

Playing card symbols - The playing symbols are the least valuable symbols in Thunderstruck II. Landing five 9 or 10, symbols will reward you with 100x your stake. Win up to 125x your stake by landing 5 J or Q symbols on a payline. Receive 10, 20 or 150x your stake for landing 3, 4 or 5 K or A symbols on a line.

Wildstorm feature - The Wildstorm feature is triggered at any point during the game. When this feature activates, up to 5 reels can turn wild. This means you could win a nice 1, 000x your bet. 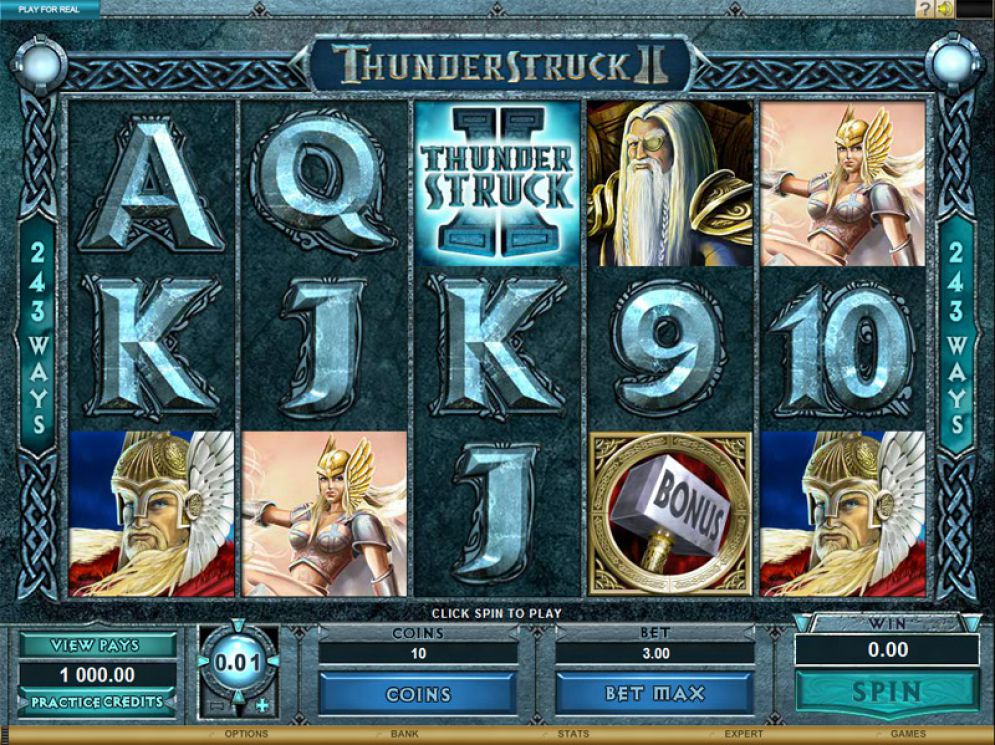 The stand out feature in this slot is definitely the great hall of spins feature which has 4 mini-features inside. Of course, the Thor feature is the best as you can win 25 free spins and generous multipliers. With every spin, you have the chance of winning up to an amazing 12, 150x your stake.