Who is the Highest Paid Gambling Executive? 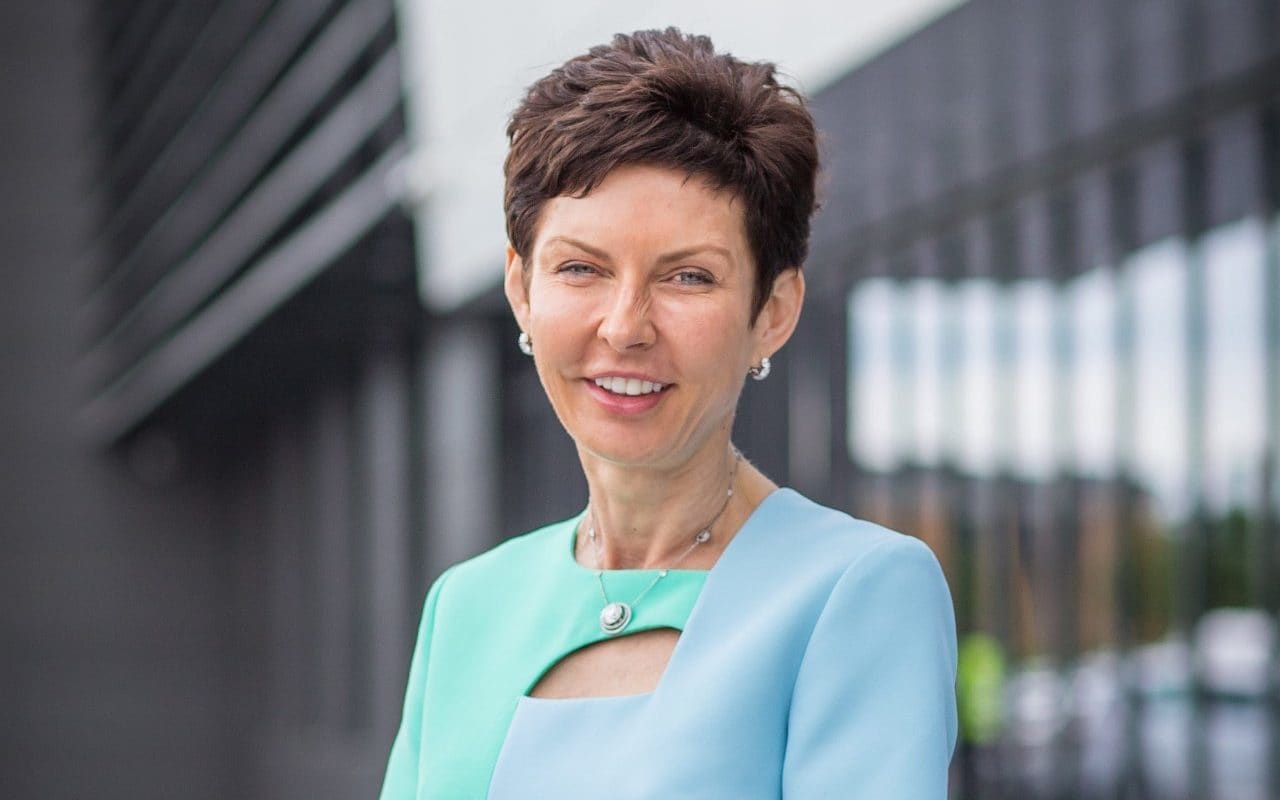 Who is the Highest Paid Gambling Executive?

Despite there having recently been a general election where the wealth divide has been publicised more so than usual, there are still some huge earners in the UK.  The gambling, or in other words slot games, sector is no exception to this either with them working harder than ever to try and entice players on to their sites over other sites due to the larger and increasing amount of competition.

With our appreciation for gambling and gaming with online slots continuing to grow with every passing year, the popularity of playing online has seen an increase in these sectors which has gone through the roof in the last two decades especially.  This is all thanks to the speed at which the internet’s development is evolving and how much we rely on it for everything we do as a nation.

With gaming and gambling having moved away from the original formats of the bricks and mortar casinos, the more forward-thinking firms moved over to the internet and online gambling sooner than most.  It is these specific companies who have profited severely from this foresight.

With games like Starburst free spins no deposit players are going back for more and not surprisingly.

Take Denise Coates, for example.  She is one of the two CEOs of the well-known gambling company, Bet365, with her brother being her business partner and father being the chairman.  Bet365 is a family run company and Ms Coates has the bigger percentage share of the firm over her brother.  But Ms Coates has worked hard to get to where she is today and has built up and impressive reputation.  She began by studying hard and achieving a first-class degree from Sheffield University in Econometrics which she knew would be hugely useful to her family firm.  Once qualified in the subject which analyses how the statistical methods of economic data are applied, she returned to her fathers’ High Street firm and began to work for him.

It didn’t take Ms Coates long to realise that she was able to identify a gap in the market and took her father’s High Street firm online where she also chose to invest in the domain name we all recognise today of Bet365.com.  Having made the leap from High Street to online gambling in 2000, it was only a few years before Coates had the firm making considerable sums of money which has risen almost every year, except 2013.  The most dramatic increase was seen between 2016 and 2017 where there was an increase of £145 million in Coates’ salary.  This years’ pay has seen Coates take home and incredible £277 million (excluding dividends) as her share of the profits, so this is not even the total figure of profits made by the company overall, which is thought to be around £791 million before tax. 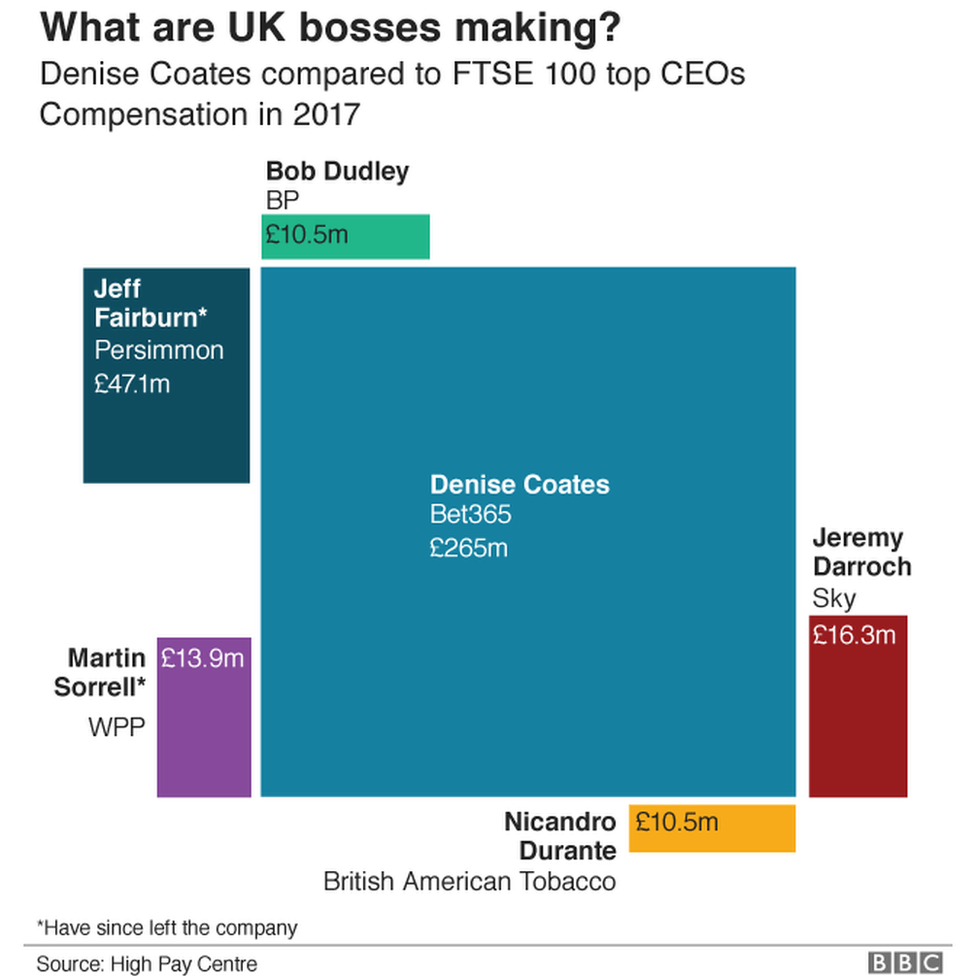 There is, of course, a big divide in opinion regarding people who earn such large figures of money per year as their salaries.  With some people struggling to understand such quantities due to there being such a large divide in wealth.  But the news of some of the largest earners’ earnings being released so close to the time of the last general election will not have helped this at all.  It actually looks like this was timed specifically so that the majority of Britain developed a somewhat cynical view of what they thought about the largest earners of the country.  But are they simply left feeling jealous about someone having so much money that they can’t even spend it or are they simply dreaming of a life that they will probably never have the fortune to be able to live?

From the other side of this argument, the highest earners of the country get taxed at the highest level and contribute huge amounts towards our country.  Though everyone in the highest earning tax bracket is taxed the same amount, it is still a percentage, so the more they earn, the more money will be contributed into the tax pot for essential resources that Britain needs.

Without these big earners contributing the amounts that they do, there would be many financial issues in Britain which would be problems for all of us, such as the NHS, roads and schooling.

There are some people who sit somewhat on the fence in the debate over high paying CEOs, feeling that businesses should have every right to strive and be successful.  Luke Hildyard, the executive director of High Pay Centre is one such person and he thinks that business success should be promoted, encouraged and incentivised.  But he does not see why the quantities of money earned by the highest earners needs to be so outrageous when there is nothing that these people can possibly spend this volume of cash on in their lifetime.  He does not seem to be the only person of this opinion, with many people left wondering what on earth happens to this quantity of money!

The most popular form of gambling has been that of playing on slot machines year decades and this remains the most popular way to play online too.  This is because it is so easy to participate in and requires absolutely no skill or strategy to be able to play the game.  With betting levels open to anyone and everyone, the minimum limit can start from as little as 1p and can go up into the hundreds should you want it to and if your bankroll allows.

Gamers love that there is so much variety with different slots games with so many different themes to choose from and there are so many new slots games being released every week that there is no time for players to get bored.  With new slots games being released on the Bet365 website all the time, it seems that the success of this site is not going to disappear any time soon, which will be great news for Ms Coates and her family.  But what exactly do you think about the highest earning CEO in the gambling world?

If you consider yourself as having a gambling problem, then follow our link and don’t make these people even richer!