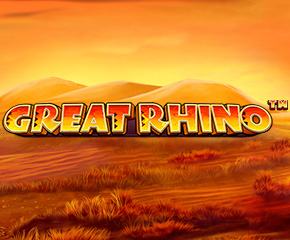 Great Rhino is an online slots game from Pragmatic Play. This title will definitely appeal to lovers of wildlife and nature documentaries.

So, the eight people on the planet who do not love animals can skip this article. The placement of the reels looks really impressive when you start to play this game.

It looks beautiful in front of the pretty African plains, which form the backdrop of the game. A charging rhinoceros with a golden horn appears on the game’s welcome page.

We loved this image. It is beautifully rendered and foreshadows the game's overall amazing quality.

In this article, you can read more about this fantastic online casino game. We will take a closer look at the game’s structure and the features and bonuses that are on offer in it.

You can also find out a little more about the quality of the graphics and sound that are deployed in the game. We will also give you some useful information about Pragmatic Play.

In addition, we will discuss the other online slots games that they have produced. If you enjoy playing slots with free spins, make sure you check out this review of Great Rhino from Pragmatic Play!

Pragmatic Play is a relatively new games developer, having been founded as recently as 2015. Like many companies in the gambling industry, Pragmatic is based on the Mediterranean island of Malta.

More specifically, in the town of Sliema, though they do have premises scatted around the world. Pragmatic offices can be found in the United Kingdom, as well as in Romania, India, Ukraine and Gibraltar.

Pragmatic has won awards for the quality of their online slots and other products. They took the Software Rising Star category at the EGR B2B Awards in 2017.

They also won Best Digital Company of the Year, Best Gamified Experience Company and Best HR Director of the Year at the Malta iGaming Awards in the same year.

Pragmatic is also licensed to operate in countries across the world. Significantly, they hold licences from the Malta Gaming Authority and the UK Gaming Commission.

These are two authorities which set stringent requirements for companies. They are created to protect the rights of gamblers.

The company also has active partnerships with some of the world’s biggest online casinos and bookmakers. This includes British giants William Hill, as well as Mr Green, SkyBet and Bwin.

Games from Pragmatic Play that you might find in an online UK casino include:

The heat of the hot sun can radiate from this game. And, not just because our devices processors are overheating trying to handle these amazing graphics! We really enjoyed the high quality of the graphics.

The backdrop of the African savannah is beautifully rendered, with the bright gold of the sunlight shining over the plains. The reels are populated by a series of African animals. This includes favourites, such as flamingos, cheetahs, hyenas, a charging rhino and crocodiles.

The quality of the graphics extends to the symbols on the reels. While the soundtrack offers music and sound effects that deliver an immersive experience for all players.

The rhino of the title plays an important role too, as he can be found on the blue disk that functions as the game’s wild symbol.

This will substitute for all other symbols to form new winning combinations. The lower valued symbols are the letters and numbers you find in most traditional slot games. There are five reels, three rows and 20 fixed pay lines of action on offer to players in total.

One iconic thing that really evokes the spirit of the African Savannah is the baobab tree. Is it an important symbol in this game.

There are two bonus features for you to enjoy in this game. Free spins are the simpler of the two, and you pick up 10 free spins if you manage to spin in three scatter symbols on the second, third or fourth reel.

During this feature, the conventional rhino symbol on the reels will turn into an extra wild to help you pick up more wins. It is not possible to pick up any additional free spins during this feature.

The other bonus feature is called Super Respin, and this is triggered by you landing at least two reels full up with rhino symbols.

Those reels then remain frozen in place while you get three free spins. If any other rhino symbols appear they will also freeze in place and you will be awarded another bonus re-spin. If all spaces on the reels end up filled with rhinos you will receive the Grand Jackpot.

If you manage to bring 14 rhinos, you will win the Major Jackpot. Click here to play online slots today at Star Slots.

This game is perfect for those who enjoy playing slots online and are also animal lovers. Or, if you are someone who likes to watch nature documentaries, this is a game that you are sure to appreciate.

As soon as the game begins you are introduced to a beautifully presented world of African flora and fauna. The evocative music and sound effects draw the player into the exotic setting. The animals on the reels look superb too, and the gameplay is very slick and smooth.

The action on the reels can provide plenty of entertainment and ways to win, and there are two good bonus features in the game.

While the features do not require much actual gaming skill, they do rely on you being able to use your judgement. And, are potentially very lucrative indeed, with some big jackpot prizes on offer. As online slots go, this game is among the better titles out there.

There is plenty of entertainment to be found in this game, whether you are new to the world of online fruit machines or an online casino veteran.

Make sure you look out for Great Rhino in your favourite online UK casino, it will be well worth some of your time. Alternatively, if you fancy changing things up, why not try Rainbow Riches Slot? So, you can keep the good times spinning your way!