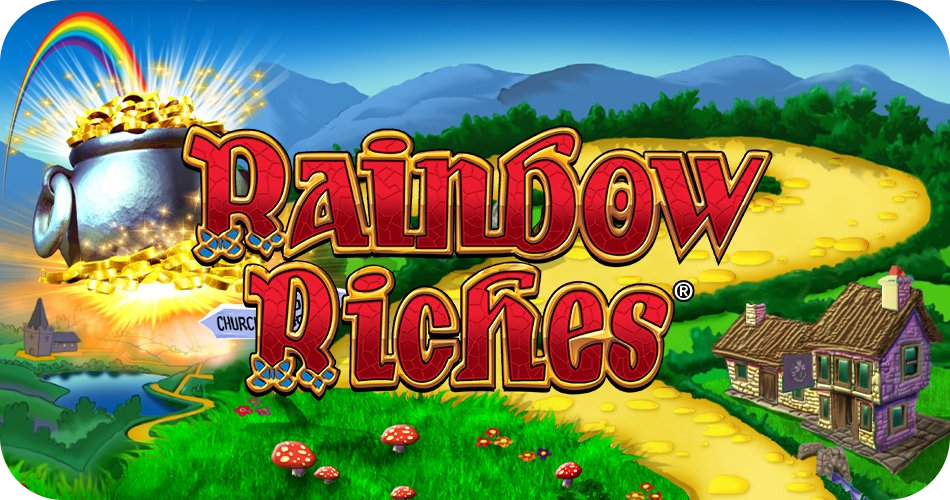 Rainbow Riches slots game created by British online casino developer Barcrest. Released in 2006, it has acquired iconic status and can be found in almost any online UK slot site that you click on.

There are five reels, three rows and 20 pay lines in this slot game. It is an Irish Luck themed game.

Here, we will take a closer look at Rainbow Riches. By the end of this review, you should have a pretty strong idea about whether or not this is the type of online slots game that you enjoy.

We’ll take a look at how the game looks and sounds, as well as at the bonus features. Additionally, we will judge how entertaining and successful this title is.

You can also found out a little more about Barcrest, who developed the game, and their range of other games. Read on to discover all you can about Rainbow Riches and the hundreds of more slot games on offer at Star Slots!

The Irish theme of this classic slots online game is really easy to pick up. Especially with the game's fun and colourful style.

The lower value symbols are represented by the traditional playing cards. You can also find a leprechaun, a wishing well and a pot of gold under a rainbow.

These are all beautifully illustrated and lend themselves well to the Irish theme. The game’s wild symbol is a gold coin and the scatter is a leprechaun.

All of which offer great opportunities to players, and increases their chances of winning. Giving the players the chance to take home some unbelievable prizes.

Our personal favourite bonus is the Roads to Riches bonus feature. This bonus is triggered when you spin in three of the game’s leprechaun scatter symbol.

This takes you to a screen where you can play a wheel of fortune type game and pick up lucrative stake multipliers.

The second of the bonuses on offer is the Wishing Well bonus. This is triggered when at least three of the wishing well symbols appear on the reels.

You then need to pick the correct well to trigger the bonus. You will then be rewarded with a multiplier which is applied to your total stake.

You also need to keep a close eye out for the pots of gold bonus symbol. If three of them appear on the second, third and fourth reels, you are taken to a screen where a leprechaun stands with 12 pots spinning around his head.

When they stop spinning, the one that lands next to the arrow is your prize. Once again, this prize is a multiplier which is applied to your stake.

The game looks very vibrant and colourful. We loved how the reels were framed by what looks like Celtic-style gold panelling. Although basic, the graphics enhance the gameplay.

The game offers plenty of chances to take home big prizes with its excellent range of bonus features. Those bonus features are triggered on a regular basis during play.

You have many opportunities to do well in this game. This online casino slot game is phenomenally popular to this day, despite being released long ago.

About Barcrest and Their Other Slot Games

Barcrest is a game developer whose name will be familiar to avid fans of fruit machines in pub and arcades. The original created physical fruit machines. This means their name was printed upon machines up and down the United Kingdom.

The company was formed in 1968. They started off creating gaming devices for bingo halls, arcades and casinos. They know how to innovate and adjust with the times.

For instance, when the United Kingdom changes its regulations. The changes dictated that British gambling machines would now have to require an element of skill to the game.

After this change Barcrest leads the way in creating these skill-based slot machines.. Having established itself as one of Britain’s top gaming companies, Barcrest also expanded into Europe during this period.

By the time the new millennium dawned, Barcrest began creating online casino games. The company’s past experience creating fruit machines helped them quickly adapt to the game of online slots.

It was in 2006 that they released a game that became one of the world’s most iconic online slots games in history. This game was called Rainbow Riches. Yes, that Rainbow Riches.

Barcrest was acquired by American corporate gaming giant SG Gaming in 2011. It became one of a number of digital gaming companies that were acquired by this US conglomerate. Barcrest has hung onto its British roots, though, and still has offices in Manchester.

Other Barcrest games include:

Our Final Verdict of this Online Slot

Rainbow Riches has become one of the most popular online casino slot games. It has been turned into an extremely successful online slot series.

Although the graphics and the theme of the game are simplistic, they still hold up. The bonus features really make this Barcrest title come alive.

You have plenty of chances to take home big prizes in the three bonus features, which can be triggered at regular intervals during play. The gameplay is slick and smooth, and you can soon find yourself becoming immersed in the world of the game as you play. You could also try one of our other games like Starburst with 500 Free Spins (Full Ts&Cs Apply).

Make sure you look out for Rainbow Riches in your favourite online UK casino. Although the game has been around for almost a decade and a half now, its classic appeal has not diminished at all.

This game has been occupying players for years and years. It does not look like its popularity will diminish any time soon. You can also check out Rainbow Riches Pick N Mix Slot.