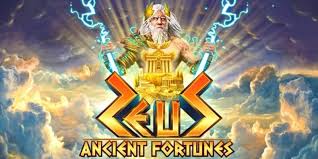 Please The Gods, Win The Gold!

Ancient Fortunes: Zeus is an online slots game. It is brought to you by the innovative British games development company, Microgaming. The game itself, as you can probably deduce from the title, is based on an Ancient Greek theme, and the graphics reflect this.

The game makes use of the Rolling Reels concept in one of its bonus features. This is something which has become something of a hallmark of Microgaming titles, and a concept that players tend to love.

Here, we will take a closer look at Ancient Fortunes: Zeus and its features. This means that you can make up your mind whether this is the kind of online slots game that appeals to you.

We’ll look at its bonus features and other aspects of the game to see if they work well. You can also find out a little more about Microgaming and the other games of theirs that you can find in an online casino. You can also play our free online slots right away!

Ancient Fortunes Zeus is a 5 reel by 10 payline online slot.  This a very similar layout to a lot of other slots out there that come from the Microgaming camp. We’d highly recommend that you set aside a couple of hours so that you can fully immerse yourself into this world, you’ll thank us later when you see just how much money you’ve earned here.

There are lots of UK's best slot games in Star Slots arsenal,  so you wouldn’t be short of fun and excitement.

Microgaming is a developer that a lot of you out there will have probably heard of in the past. These guys have quite a lot of games in their catalogue, very interesting games, to say the least.

Ancient Fortunes Zeus is just the tip of the iceberg as far as innovative gaming titles are concerned. Some of our personal favourite online slot games come from this developer.

This developer is one of the oldest going today, Microgaming’s been in business since 1994, which is a really long time ago when you stop to think about it.

The release of their Viper software in 2002, which only helped to bring them to the forefront. If you want to play some other games from these guys then here are a few that we think you should check out:

Ancient Fortunes Zeus is not the first sot to come out in this genre, but that doesn’t mean that it isn’t one of the very best in this lane. We tend to trust developers like Microgaming a lot more than others simply because of how meticulous they are with their games, and Ancient Fortune Zeus is no exception.

We’re going to cover it in a lot more detail here, but just know that you’re in for a real treat here. 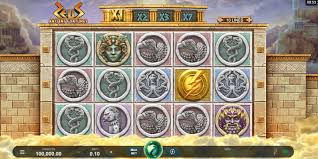 Like we’ve already mentioned, this slot takes place at Mount Olympus, a home that sits just above the clouds, a place where the gods live. The reels here take place on a wall of some kind, one that’s made out of grey stones.

We originally thought that this slot looked like the gates to Mount Olympus, but after closer inspection, this just isn’t the case.

Symbols in Ancient Fortunes Zeus are incredibly detailed, looking like they’ve been carved out of marble/granite. Each of these symbols reflects different faces, each face depicting a specific Greek god.

All of these symbols offer something completely different as far as scores are concerned. Zeus and Ares are represented here, as well as countless others.

Microgaming has a long history of developing online slots games. The company claims to have developed the world’s first true online casino software in 1994. This makes it one of the most important companies in the online gambling sector.

They also claim to have developed the world’s first casino software for mobile devices in 2004. This is another vitally important step in the development of the industry.

As well as online slots games, Microgaming also develops other types of online casino games. This includes bingo, poker, casino table games and live casino games. New titles across all sectors are launched each month, keeping the range of titles fresh and exciting.

The company also asserts that its progressive jackpot network is the largest in the world. They have paid out something in the region of €1billion to date. In 2015, the company set a Guinness world record for the ‘Largest jackpot payout in an online slot machine game’.

This was when a UK player won the pounds sterling equivalent of €17,879,645.12 from a single 25p spin. Microgaming is based in the UK, with its main offices being located on the Isle of Man.

The company is committed to fairness in all of its games. This is shown by them being a founder member of eCOGRA (e-Commerce Online Gaming Regulation and Assurance).

The company has one of the most extensive ranges of online slots games out there and often licenses content from TV shows or movies. Battlestar Galactica is one example of this type of game, though there are many others out there.

If you want to check out some of the other online fruit machines available from Microgaming, have a look at the list below: 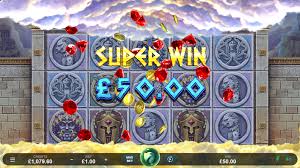 Ancient Fortunes: Zeus is a high-quality online slots game that looks really great. Its graphics and dramatic soundtrack place you firmly in the setting of Mount Olympus. Meanwhile, the stone carvings on the reels look outstanding.

The gameplay is smooth and slick, with the bonus features offering you plenty of chances to take home big prizes. The Rolling Reels feature is always good to encounter, and this game has a really good Free Spins feature.

Overall, this is a game that we highly recommend. It offers an immersive experience that will keep you coming back for more. Its high quality is typical of Microgaming’s work, with their games always offering superb standards of entertainment.

Make sure to look out for this Ancient Greek themed game in your favourite online UK casino! It will be well worth some of your time.