Chilli Heat is an online slots game that has been developed by Pragmatic Play, a relatively new games development company that is based in Malta. The game has a theme which is based on Mexico and clichéd stereotypes about Mexican life and culture, but it is still a lot of fun.

You’ll find chihuahuas, tequila shots and a sombrero-wearing vaquero with a guitar on the reels here. As well as bottles of chilli sauce, which is probably where the game gets its name from.

There are five reels, three rows and 25 fixed pay lines of action for you to enjoy in the game. Here, we will take a closer look at Chilli Heat, looking at all aspects of the game.

This includes its bonus features, in order to give you the best possible idea about its quality. You can also discover a little more about Pragmatic Play, their history and the other games that they have developed. If you want to find out about more amazing online slot games with free spins, go to Star Slots.

The reels for this game are framed by what looks like a picture frame which is adorned with Aztec type patterns. There are hints of a Mexican festival-type setting behind the reels.

However, it is impossible to discern exactly what is being depicted in the background. It certainly evokes an atmosphere of summery Latin fun, whatever it is, though.

The lower value symbols on the reels are the letters J, Q, K and A, while the high-value symbols are those which reflect the game’s specifically Mexican theme.

The sombrero-wearing guitarist is one of these higher valued symbols. As is the Chihuahua in his red scarf, the tequila shot and the bottle of chilli sauce.

The game’s wild symbol is easy to spot as it is the game’s logo, surrounded by flames. This symbol can substitute for all others to create winning combinations for you, apart from the two bonus symbols.

The bonus symbols are the sun, who is wearing a Mexican moustache, and the money bag. Both of these symbols will open up the game’s bonus features. Play more great slots games on Star Slots!

There are two bonus features for your entertainment on offer in Chilli Heat. The Free Spins feature is triggered when you spin in three of the sun scatter symbols on reels three, four and five.

The other bonus feature in the game is the Money Respin. This is triggered when you land six of the money bag bonus symbol in view anywhere on the reels. Those bags are frozen in place on the reels, and the reels will be filled only by money bags and blank spaces.

Initially, you will receive three free spins but every time another money bag spins in this tally will be reset. This is an awesome online slots game.

The feature ends when no new money bags spin in. Then the numbers on all the money bags are added up and awarded to you as prize money.

If all 15 spaces on the reels are filled up with money bag symbols you will win the jackpot. 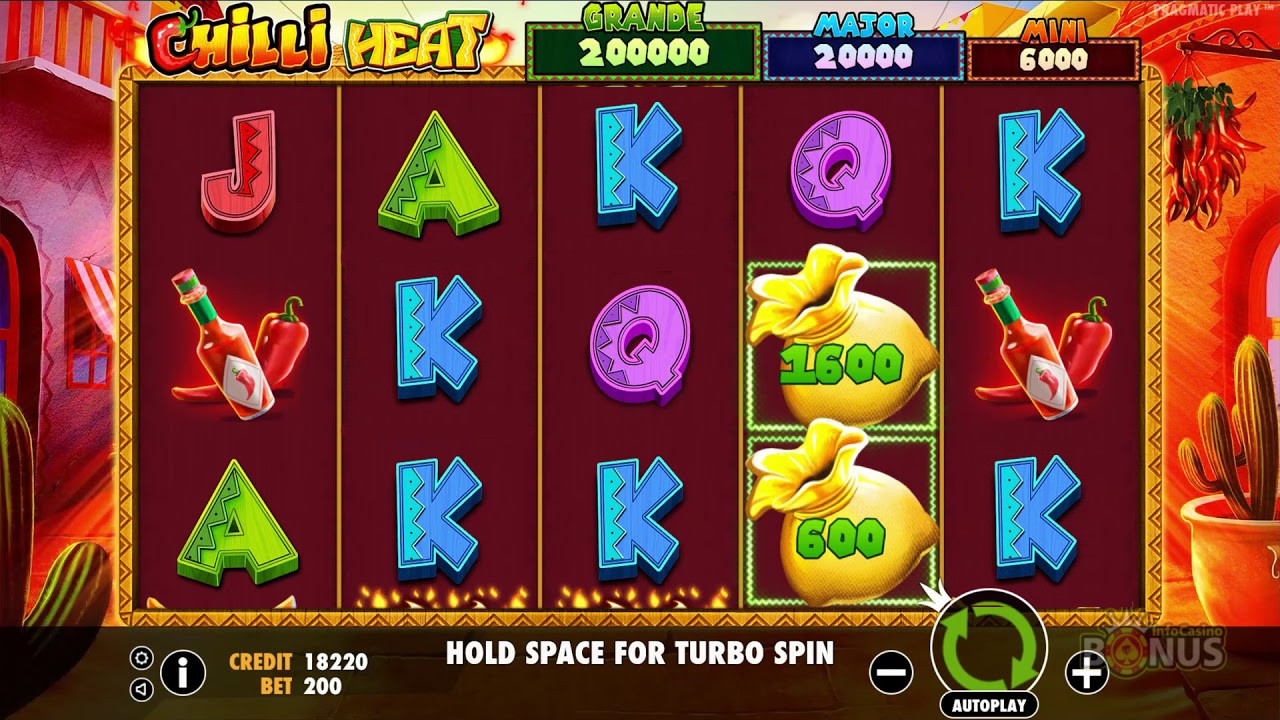 Pragmatic Play is one of the newer kids on the block when it comes to developing games for online slots players. The company was founded in 2015, so they have been developing online slots games for just under four years at the time of writing.

They have moved quickly when it comes to developing a reputation for quality, though, and their slots games can be found in many an online casino.

Like many games developers, Pragmatic Play is based on the island of Malta in the Mediterranean. Its Maltese offices are in the town of Sliema, but the company also has other premises in countries across the world.

These include Romania, Ukraine and Gibraltar in Europe, and India in Asia. Although the company has been in existence for under half a decade, they have managed to pick up quite a few awards for the quality of their games already.

They won Best Digital Company of the Year, Best Gamified Experience Company and Best HR Director of the Year at the Malta iGaming Awards in 2017. Also in that year, they took the prize for Software Rising Star category at the EGR B2B Awards.

Pragmatic Play hold licences from two of the most stringent gambling regulatory bodies in the world. One of these bodies is the UK Gambling Commission, and the other is the Malta Gaming Authority.

In order to achieve recognition from these regulatory bodies, the company has to meet the highest standards of fairness in their games.

Pragmatic Play has a large range of online slots games for fans of UK casino gaming to enjoy. Here are some of their other titles, many of which you may well be already familiar with if you like fruit machines.

Chilli Heat is a fun online slots game that will appeal to fans of online fruit machines of all levels of experience. Newcomers will enjoy the cheerful graphics and slick gameplay.

Meanwhile, more seasoned online slots gamers will enjoy the relative complexity of the two bonus features. There are also plenty of opportunities to take home big prizes. The game’s graphics and music also help to create an immersive experience.

A Return to Player rate of 95.52% means that the chances are good for you to win some of the bigger prizes on offer. The mariachi music that plays throughout the game helps to create a festive, Latin atmosphere that makes this game ideal to play in the summer heat.

Make sure you look out for Chilli Heat at your favourite online UK casino! If you enjoy this game, play Da Vinci's Treasure Slot!