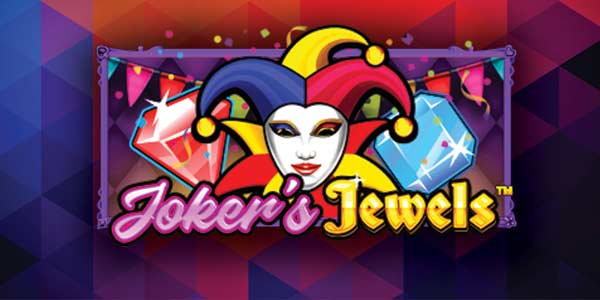 Joker’s Jewels is a very basic online slots game that will particularly appeal to newcomers to the world of playing slots online.

This is a very simple game that has none of the range of features that many more contemporary online slots games have.

That is not to say, though, that this game is not worthy of your attention. The game offers plenty of entertainment to players, but you will be relying almost purely on luck when you play it.

There are just five fixed pay lines in the game, which has five reels and three rows of action for you to enjoy.

The overall design and theme of the game are that of a cabinet-based slots game that you might find in a Las Vegas casino, with many of the symbols the game’s title.

Read on to discover more about Joker’s Jewels, as well as a little bit more about the company that developed the game. Join Star Slots and win 500 Free Starburst Spins!

As we have stated above, Joker’s Jewels is not the kind of online slots game that you will get a lot out of if you like games with loads of bonus features.

The recent trend in online casino slot games has been to make bonus features more elaborate. To include more opportunities for players to show some gaming skill in the features.

However, this game takes the opposite approach. Joker’s Jewels has been made as simple as possible by its developer, Pragmatic Play.

There are just eight symbols on the reels in the game, with the most valuable of them being the joker of the game’s title.

You can receive a prize worth 1000 times your stake per spin if you manage to spin in five jokers on a payline. You will also see the joker’s lute, his pointy shoes with bells on, and some juggling skittles. The lower value symbols on the reels are gems, and there are three colours: light blue, dark blue and red.

There is no wild symbol in this very simple and basic slots online game. There is a scatter symbol, though, which is a crown encrusted with jewels.

If three of these appear anywhere in view on the reels then you have a chance of winning some prizes. If this happens you have a chance of picking up some significant stake multipliers. You can win 10, 50 or 250 times your stake if the scatter symbols appear in the right configuration.

This is the type of game that requires very little input from the player during the action. There are no bonus features that require any skill at all.

You can simply load up the game with credit and hit autoplay, and then leave it running. The level of your winnings will depend entirely on the luck and the way the random number generator decides to treat you.

If you manage to fill the reels entirely with jesters then you will win the game’s main jackpot, which is worth 5000 times your stake.

Despite its basic nature and the low number of pay lines in this game, it is still quite a lot of fun to play. There are many more challenging fruit machines in your typical online UK casino.

But, Joker’s Jewels is always there if you want a simpler life when it comes to playing slots online. Does this sound like your cup of tea? Join Star Slots for more great slots games! Pragmatic Play was established in 2015. This makes it a very new company when it comes to games development.

During its short existence, it has quickly established a reputation for quality. It has a number of well-recognised and popular games in its catalogue.

Based in the town of Sliema, in Malta, Pragmatic now has other offices across Europe and Asia. This includes Ukraine, Gibraltar, India and the United Kingdom, as well as Romania.

The quality of the company’s output can be discerned by the number of awards that they have managed to receive.

Despite being in existence for just under four years. Pragmatic Play won Best Digital Company of the Year, Best HR Director of the Year and Best Gamified Experience Company. They won these at the Malta iGaming Awards in 2017.

They also emerged as the winners from the Software Rising Star category at the EGR B2B Awards in the same year.

Another measure of the company’s high standards that they adhere to two of the world’s most stringent gambling regulatory bodies.

These bodes are the UK Gambling Commission and the Malta Gaming Authority. These bodies have very high standards when it comes to issues such as fairness in games.

They function to allow customers to gamble responsibly and safely. Holding licences from these bodies is the sign of a gaming company which keeps to very high standards and can be trusted by punters. Love online slots?

If you are a fan of online fruit machines and visit an online casino frequently you may well have played some of the Pragmatic Play’s other titles.

Here are a few of the other games that can be found in the Pragmatic Play catalogue:

Joker’s Jewels is a very basic online slots game that is perfect for complete novices. As an introduction to the world of fruit machines, this game is ideal because there are no complex bonus features to distract the novice player.

The simplicity of the gameplay means that the game moves quickly. It actually works really well in autoplay mode. This is not normally something that we would recommend, as you give up a little bit of control of the action.

Overall, the graphics and sound are good in this very simple game, so it is always appealing to look at.

You do need to make sure you know what to expect if you log on at an online casino and want to play Joker’s Jewels, though.

This is not game that will test your memory, intellect or gaming skill. It is simply a case of relying on luck. Make sure you look out for Jokers’ Jewels at your favourite online UK casino!